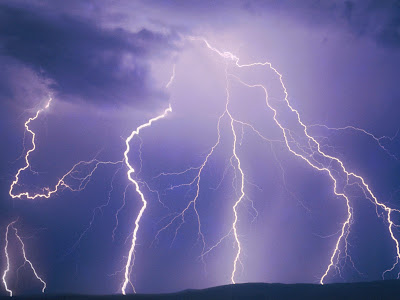 Tonight I had to shut off the computer because of a SEVERE thunderstorm.

The lightening was across the entire sky, and intense, heavy rain.

It didn't last long, and eventually it was ok to turn the computer on.

The first picture to appear on the wallpaper was an intense lightening photo.

The next pix to appear, a rainbow!

Is the computer trying to communicate with me, or what this sheer coincidence? 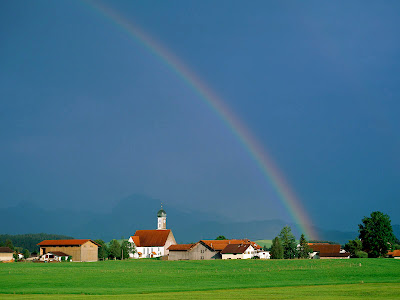 Posted by Simply Aware at 9:57 PM Links to this post

I guess it is officially Spring, as the Red Winged Blackbirds have begun to arrive. I saw the first one last week on Tuesday. On Wednesday I saw a few more and by Sunday, I see them everywhere. The males are easy to identify. They are black with a stripe across the wing which is yellow, underlined by an orange red. Last year I looked up what the females look like since I didn't know if I'd seen one or not. Turns out they are brown and tan speckeled, and look much like several other species, so I still don't know if I've seen one.

The males are quite solitary. Sometimes you'll see a few, maybe 3, flying together, but mostly you see them sitting on their perch. They prefer the reeds that grow in swampy areas. The bird is rather large, about like a robin. However, these birds are perched on a slender reed that doesn't always seem like it can hold them. They also line up on the chain-link fencing that seperates the freeway from the public domain. They are evenly spaced. If there are 3 birds, they will be about 20 feet apart. Just now you can see them perched in the bare bushes, and can even see some of the nests from last year. I like to think that the birds have come back to their same selected piece of Real Estate.

Since you never see other birds around them, I wonder if the females are still on their way. I like to think the males come to stake out their territory for the mating season and get a habitat ready to lure the female. Then, the females arrive, pick a likely bachelor and set up housekeeping. I'm really going to have to look into what is known about these birds, as my imagination may be way off the mark!

Whatever their story, I love to see them. They are beautiful and proud and quite independant.
Posted by Simply Aware at 6:47 PM Links to this post

Changing the World while Shopping

I HATE to shop. I dread holidays coming because I know that I'm expected to find gifts for people. It's not that I dislike giving. I Love to give. But I hate to shop, mostly because I don't like spending money on useless stuff. And most gifts to me, are useless stuff. So, while looking through the endless websites for online gifts (YES, I left the shopping to the very last possible moment) I came across the answer to all my gift buying nightmares. I found CHANGING THE PRESENT. This is a website that allows you to spend the money on something that really matters! Instead of buying something that is very likely not needed for someone that could buy it for themselves anyway----you can spend that money on someone for whom it will make a real difference! I think I may start looking for excuses to give gifts!
Posted by Simply Aware at 4:21 PM Links to this post