Total Eclipse of the Moon 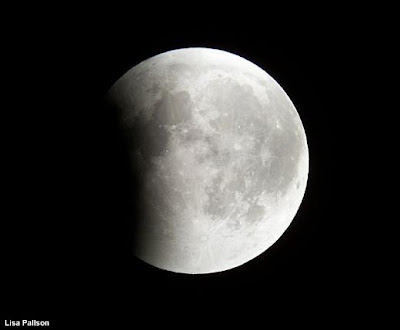 It is still COLD and MISERABLE here in Madison, but we have "events" that pull our mind away from our winter woes from time to time. One of these was the Lunar Eclipse last night. The night was totally clear, so we could see the whole event. I was working 2pm till 10:30pm, but everyone was aware of what was happening and we'd take turns to run out and check it out. It was only COLD instead of SUPERCOLD, so we could run outside for that brief moment without totally bundling up.

I had no idea we were expecting this phenomenon until the cashier at the convenience store I stopped at told me. Lately I've been out of touch with most things, as all my energy and effort is required to keep enduring WINTER! I did find a cool site that will keep you abreast of when and where to expect the next eclipse. www.MrEclipse.com

By the time the eclipse was over and I was going home, the weather did get colder. MUCH COLDER! My gearshift froze so that when I got home, it wouldn't go into nor stay in Park. Since it wouldn't go into Park, the key wouldn't come out. After putting on the emergency brake, I left the keys in the car with the dash lights lit and prayed that tomorrow the battery won't have totally discharged keeping those lights on, and that it will start and unfreeze enough to get back to normal.
Posted by Simply Aware at 10:17 AM Links to this post 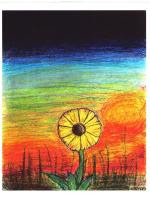 I can't put my finger on it, but at some point I passed the place of being willing to acknowledge holidays. At first it was just the major holidays I no longer wanted to celebrate; Christmas, Easter, New Years. While many holidays fall in the category of Who Really Cares Anyway; St. Paddy's Day, Memorial Day, President's Day, there are a couple of holidays still on my Let's Celebrate these list; Thanksgiving, 4th of July (fireworks!!!)

That point I don't remember passing was when Valentine's Day went from the Who Really Cares Anyway list to the I WILL NOT CELEBRATE THIS PARTICULAR HOLIDAY list.

As a child, I loved Valentine's Day. Every year I made my Valentine Box (usually an old shoe box covered in crepe paper and decorated with doilies and paper hearts), bought and addressed a Valentine to every member of my school class, and spend lots of time putting the appropriate conversation heart into each envelope.

After school we would spend time making heart shaped sugar cookies, icing them and writing names on the cookies. We would take these treats, with additional Valentines to our "special" friends houses. The tradition was to put them on the porch, ring the door bell and run away before they opened the door. I'm not sure why it was so important to not be caught giving Valentine's to our friends, but it was an exciting part of the process.

I would open all my Valentine's, read special intent into the messages, try to guess the identity of any Anonymous cards, and line this collection up on my bed--proof that I was liked, loved, and thought to be special.

Well into adulthood, I would buy, write appropriate sentiment in, and mail Valentine's to friends and loved ones. Now, the thought of doing that actually makes me angry! When did I become such a hardass? and more importantly--WHY?

I'll have to spend some time puzzling this out, and maybe I'll let you know, eventually. In the meantime, I apologize for anyone who feels slighted, bewildered or unappreciated by my behavior.
Posted by Simply Aware at 12:39 PM Links to this post

Back to the Weather! 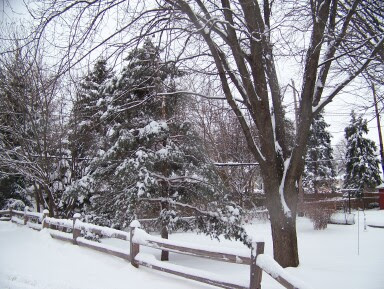 It doesn't just rain, it POURS--SNOW!!! We had warmer days and lots of snow became slush. Then it froze, creating a smooth layer of ice which has been snowed on. 8-12" so far, and it's going to snow harder now. We may have 20" before we're done. Plus, the wind is blowing, so there is drifting and whiteout for moments.

Driving home from work, normally a 15 minute drive, took me 40 minutes. In the main streets, cars were stalled, spun out on that layer of ice under the snow. The snow is so deep, that once you turn off a main road it's anybody's guess whether you'll make it through the intersection. I was white knuckling it most of the way home. But my car made it! Bless her engine!!

Now I guess we make hot chocolate, toast some cheese sandwiches and turn on the TV for entertainment. I'm home for the evening, even though it's only 3:30.

HA! We learned that the malls were closing and that the bus lines were going to suspend service at 7pm. Warnings were issued to motorists to STAY HOME unless absolutely necessary, as the driving conditions were going to get worse.

My hubby had taken the bus to work, and now the bus service was going to stop, just when he needed to get home. So I volunteered to go get him. Big mistake! I barely made it out of the driveway, the snow was so deep. I was forced to turn Left instead of Right (toward the main roads) because two of the neighbors were digging their cars out and multiple people were gathered in the road trying to push these vehicles to the proper side of the road for the evening (reread my blog on Madison's Winter Parking Laws!).

The left turn put me in no mans land. I was slip-sliding all over the road, but was making progress until I came to the corner to turn into a plowed road. The snowplow had deposited the excess snow in the intersection I needed to cross. My car came to an absolute halt. When I got out of the car, it was buried to the wheel wells.

I ranted, I raved, I swore a blue streak. Then I got down on my hands and knees to start trying to remove some of the snow. Eventually someone got stuck trying to enter the road opposite me, but they called someone who came quickly and helped get them going. Then they turned their attention on me, and a couple of strangers walking by assisted in pushing the car once we got some snow removed. THANK GOD FOR THE KINDNESS OF STRANGERS!

Once I was on the plowed road, I was fine. I called Loren to find he'd been able to catch the very last bus and was walking the last half mile home. He was closer to our house that I was. So I circled around, on the plowed roads, to get back home. While I'd been having my little adventure, the landlords had been by to clear the driveway and walks. We all helped two more people on the street dig out their cars and get them onto the proper side. All in all it was a real adventure. But next time, I'm just going to stay home with my hot chocolate!

Later we heard on the news that two semi's had jack knifed in the bad weather conditions and people were stuck on the freeway for up to 8 hours! They had to call a couple of local snowmobile clubs to help rescue people by taking them liquids and blankets.
Posted by Simply Aware at 3:40 PM Links to this post

What's it all about?

Today has been a day of total indulgence. I slept late, ate whatever I wanted, took a leisurely turn on the massage bed, and overloaded my senses with a variety of media.

It started with Dan Fogelberg on the headphones while I was on the massage bed. I put on "Innocent Age" and listened to it from start to finish. Again, I was moved and inspired by the music. Too often I listen to music as background to other activities. It's rare for me to put on the headphones and do nothing but absorb the musical message. Obviously it's something I need to do more often, because it fed me at such a deep, cellular level. I feel reborn, recommitted, and redeemed. As I listened to parts of the album, I was moved to tears with the feeling of loss knowing Dan is gone, and inspired by his legacy and gift to me/us.

Next, I was surfing the computer and popped onto one of my favorite links to see what is new in the art of Michael Fatali. Again, I was moved to tears to see these beautiful images. I feel a connection to this part of the world, and was reminded of how much I love Zion and the surrounding area. I was also moved to realize that Michael spends his days in this beauty, using his talent to both produce these beautiful images, and make his living. 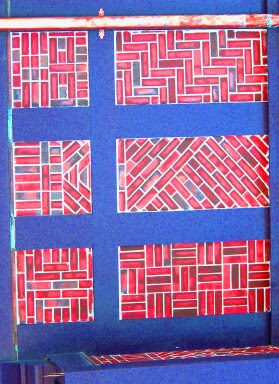 It occurred to me in a deeper and more profound way that I've been going about the process of figuring out what I want to do with the rest of my life all wrong. I've committed the sin of limiting my imagination. Most of what I've been considering is what is right in front of my eyes, when what I really prefer are things that are barely on my radar. Today has been about opening my eyes to the endless possibilities out there.

Last, I visited the site for Alex Grey to get caught up and inspired.I was reminded of how much I want to see his work in person. When we saw it in San Diego it was so inspiring that we spend hours studying it. He has produced new art, and I'd like to see it showcased in the gallery. 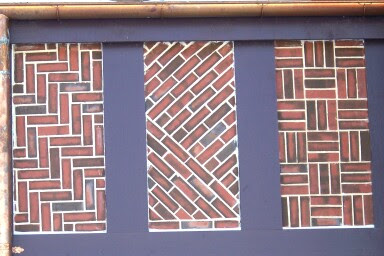 I spent the day with three artists that made/make it their life work to bring their vision and talent into the world in a medium that can be shared with others. That I am inspired, and delighted and blessed by their efforts is just icing on the cake. None of them do it for me/us. They do it because it is who they are, what they do. And I realized THAT is what I'm looking for. What is it that I MUST do? Not for fame or money or immortality, but because it's who/what I am, and it needs expression. It's a whole new ballgame, now that I have a better question that needs answering. Now I'll just try to get quiet, and listen in that deep part of myself for the answer. And pray for the courage to pursue the vision once it arrives.
Posted by Simply Aware at 3:45 PM Links to this post