Not sure if it's just that I'm feeling the end of the year, or the end of an era...but I may be finished with this blog.

I've had lots of fun with it, and I get a kick out of rereading the old entries. It's been a diary of sorts for me.

I'm not going to delete the blog, but I doubt I'll add to it either. 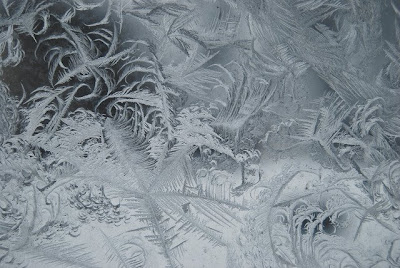 It's 8am, and the temperature is hovering at 10 below! We're going for a high today of 4 degrees! Welcome to the first official day of Winter!!

We've had more snow. Beautiful snow. The last batch was light and fluffy and SPARKLING. Everywhere you look, it's glittering and twinkling. Probably because it's little ice crystals, dah! Even though there were 6-7 inches of snow on my car, it was easy to whisk it off. No scraping or chipping. It was like I was removing the snow magically, it was so easy.

Of course with such light snow, the wind is able to blow it around. It's not just going to be cccccccold today, it's going to be blustery. With the wind chill, the temperature is going to be 20 - 34 degrees BELOW 0. (I wish we'd use the Celsius standard)

We both have the day off. I'm sipping hot chocolate while I watch Winter out the window. The sky is clear, so when the sun begins to stream into our apartment, I'll do a little sun bathing. I've a big vat of oxtail soup simmering on the stove. I don't plan to step foot outside today!

Update: At noon, the temperature is -6. I don't think we're going to make it to the predicted 4 degrees above 0 today!
Posted by Simply Aware at 8:03 AM Links to this post

A few weeks ago, I needed a book to read. Looking through my bookcases for a little light reading, I decided to read Harry Potter and the Sorcerer's Stone. I love the first book, and thought I'd read it, the end.

Ha! At the end of book 1, I HAD to go on to book 2... etc ...finishing up with Harry Potter and the Deathly Hallows. This is the third time I've read the last book. The others were read each time a new book came out, as I'd read all the previous books to be prepared for the latest installment. So, I've read the Harry Potter book a number of times.

Again, I was sucked into the stories as though they were brand new. Little details that I'd previously missed jumped out at me, and I was astounded at the number of clues we've been given right from the start!! J.K. Rowling is one of my favorite writers. Every time I read the series, I'm reminded of what a clever witch she is.

I've seen the ads for the new book, but it had escaped me that I was rereading the series in preparation for The Tales of Beedle the Bard. I'm trying to limit myself to one story per day, so I can make it last. Thank you Ms. Rowling for another wonderful read!
Posted by Simply Aware at 12:20 PM Links to this post

I'm Dreaming of a White Christmas

This is my favorite Christmas video. Every year I look for this one, because it always makes me smile!
Turn up the volume, and prepare to be Entertained!!

Looks like we'll be HAVING a White Christmas. Five inches of snow yesterday, and 10 more expected tomorrow. Oh What Fun....
Posted by Simply Aware at 7:02 PM Links to this post

So many things happening around the world, and I'm consumed with the Weather. Again? Still? 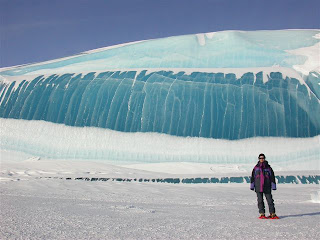 No, this is NOT Wisconsin. It's the Antarctic, where it's so cold the water freezes the instant it meets the air. It's not that cold here. And while I think it's cold, I was just reading about the North East, and how those people are having really cold weather and NO POWER! That is so much worse than what we're experiencing that it's not even the same category. However, here's MY latest weather story...

Last week we had snow. Lots of snow piled everywhere from clearing the roads and sidewalks. I figured it was the beginning of a long, White Winter. We were having temps in the low 20's. Typical Winter Weather.

Yesterday, a warm front came through. 45 degrees!! and RAIN! Lots of rain. It took those piles of snow down to half their size, and exposed all the dirt and debris under that cover of pretty white.

Immediately behind the warm front, was a cold front. The temperature plummeted to 11 degrees in a short period of time, freezing the rain and melted snow. Oh Boy! With the cold temperatures, came 40mph winds, which brought the temp with windchill in the -20's.

Today it is sunny, but bitterly cold. Even with the sunshine, the temperature is not even a degree. The current temp is .3, and with the windchill figured in, it's -17. I don't have to go to work until 2pm, so I'll be staying in the house. I'm afraid of the cold!

Our Winter Advisory is in effect until later today, when the wind will calm down. Once that happens, the temperature is supposed to go up, enough that it can snow tomorrow. It doesn't snow when it's this bitterly cold, and now I actually WANT it to snow, to cover all these dirty snowbanks with clean, sparkling White!
Posted by Simply Aware at 9:05 AM Links to this post


I've always been fascinated with the 12 Days of Christmas. Maybe I'm just greedy, and the thought of all those presents was appealing? I'm not sure what the fascination is, but if I was going to collect anything, it would be things with this theme. Since I'm not a collector, I'll just enjoy some of my favorite 12 Days memorabilia.

This item is one of my all time favorites. I send this beautiful card, designed by Jacquie Lawson, regularly. You can watch it again and again by clicking here:
http://www.jacquielawson.com/viewcard.asp?code=1620943231020&source=jl999 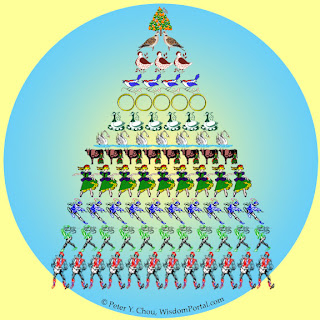 When I was growing up, in Utah, every year the Salt Lake Tribune would run an article about the actual cost of the gifts contained in the 12 Days of Christmas song. When I began following this article in about 1968, the cost was around Ten Thousand. At the time, it was a staggering amount!

"Given the economic downturn, even the most romantic might balk at the $86,609 price tag for the items in the carol "The Twelve Days of Christmas."

That's this year's cost, according to the annual Christmas Price Index compiled by PNC Wealth Management, which tallies the single partridge in a pear tree to the 12 drummers drumming, purchased repeatedly as the song suggests. The price is up $8,508 or 10.9 percent, from $78,100 last year.

"True loves may take it on the chin for a peck on the cheek," said Jim Dunigan, managing executive of investment for PNC Wealth Management, which has been calculating the cost of Christmas since 1984.

In this tight economy, what's a romantic to do?The creative but cash-strapped shopper might consider some modifications. After all, who needs dozens of birds?

Instead of two turtle doves ($55) why not two Dove chocolate bars at about buck each? Don't have $4,414 for 10 lords-a-leaping? How about a "Riverdance" DVD? Plenty of leaping there, and it's only about $25 on Amazon.com.

Save a couple grand by skipping the 11 pipers piping and getting a CD of Scottish bagpipe music for less than $20.
"The price of creativity, I think, has to be measured against the value of true love," said Dunigan. "Necessity is the mother of invention. So this year, it might pay to be a little more inventive."While some sources suggest the gold rings actually refer to ring-neck pheasants - apparently, all the birds were for feasting - Dunigan advises sticking with jewelry.

"At least my experience, if you had to lead with something, gold rings probably wouldn't be a bad idea," he said.
They are down about 11 percent, from $395 last year to $350, Dunigan said.But sticklers for tradition might also save by procrastinating. With the economy in its first consumer-led recession since the early 1980s and energy prices falling as of late, prices could come down between now and Christmas, he said.

While it is done humorously, PNC said its index mirrors actual economic trends.For instance, gasoline costs topped $4 this summer, driving up shipping costs for many goods. So a pear tree that cost $150 last year will cost $200 this year. (The partridge is up $5 to $20.)

Luxury items are also up, as reflected by the price of the seven swans-a-swimming, which are up 33 percent to $5,600.
But the faltering economy has also brought down the cost of some items.

The three French hens (down $15 to $30) and six geese-a-laying (down $120 to $240) reflect declines in food prices.
The eight maids-a-milking will cost 12 percent more, $52.40 from about $47 last year, thanks to their second annual minimum wage increase.The 10 lords-a-leaping, 11 pipers piping and 12 drummers drumming are all up about 3 percent, reflecting the general average wage increase."

I'm sure there are lots of notable and worthy items to add to my 12 Days of Christmas tribute, but I'll quit with this one.
Last but not least is a tasteless parody on the song done by JibJab. If you press this link, prepare to be offended while laughing, often against your better judgement!
http://www.jibjab.com/originals/farting_elves_12_days_of_christmas
Posted by Simply Aware at 5:59 PM Links to this post

We got 3-5 inches of snow today. That's ok. It's Winter, It Snows! However, the forecast for the next 5 days is frightening! The highs are in the LOW 20's, and the lows are in the single digits and low teens!
It's going to be a LONG winter if this is any indication of things to come.
Posted by Simply Aware at 7:36 PM Links to this post


Christmas Lights continue to be one of my favorite things about the Season.  Now that it's officially December, I'm posting a light display that should get your interest piqued.
Turn up the volume, as it isn't the same without the music.
Posted by Simply Aware at 9:31 AM Links to this post