The following SMILE is brought to you by Snowball, the Dancing Cockatoo.

This video has brought me many smiles, grins, and laughs. I can watch this over and over and it still makes me happy when I watch it. Snowballs enthusiasm is contagious! This clip has been around since 2007, and has a huge following.

Snowball is from a Bird Lovers Rescue, and is now world famous. Their blog can be found at http://birdloversonly.blogspot.com

There are other videos on YouTube, here is one of them!


ENJOY!
Posted by Simply Aware at 6:15 PM Links to this post 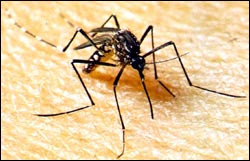 It has been a tradition of mine to bless the things that I am releasing from my life as I let them go.
GOD BLESS THE MOSQUITOES!
I've had all I can take, and now it's war, baby.  I've tried talking to them, ignoring them, swatting at them...but they haven't got the message.  So now, I'm in my annihilation mode.

Mosquitos go through four distinct stages of development during a lifetime, they undergo a complete metamorphosis; The four stages are egg, pupa, larva, and adult. The full life-cycle of a mosquito takes about a month. After drinking blood, adult females lay a raft of 50 to 400 tiny white eggs in standing water or very slow-moving water.
Within a week, the eggs hatch into larvae (sometimes called "wrigglers") that breathe air through tubes which they poke above the surface of the water. Larvae eat bits of floating organic matter and each other. Larvae molt four times as they grow; after the fourth molt, they are called "pupae".
Pupae (also called "tumblers") also live near the surface of the water, breathing through two horn-like tubes (called siphons) on their back. Pupae don't eat.
An adult mosquito emerges from a pupa when the skin splits after a couple of days. The adult lives for a few weeks.

Madison has a way of monitoring the existing mosquito population. Last year, this system registered about 300 mosquitoes in the counting area. This year that same count resulted in 3,000!!! So YES, the mosquito population is out of control.

They wait on our windows and front door. Then when the door is opened, they fly in and take up residence in the house. They lurk around all day and once we go to sleep at night, they come to feed. I wake up with bites on my arms and legs and FACE! Any part outside the covers is prime meal material, and since it's been hot, much more of me is outside the covers. I have refused to wear repellent to bed, but I may have to revise my position. 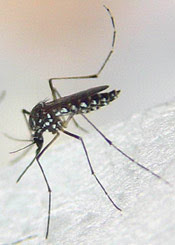 Currently I'm nursing a series of bites on my forehead right between my eyes. They itch, I scratch, they scab and I look like a trauma victim.

Walking outside to get in the car brings up a cloud of mosquitoes who have been resting in the grass. They enter the car, and the drive is peppered with wild swipe and swatting motions, often resulting in the car nearly driving into other lanes of traffic.

So far I've been unwilling to use insecticides or deet repellents. I don't like chemicals. But these fricking, sucking mosquitoes have driven my past my Natural Remedy solutions. Today I'm going to the store and buying stuff to treat the grass, the car, the house and my body. THE WAR IS ON!!!
Posted by Simply Aware at 9:59 AM Links to this post

Movies on the Big Screen

Today I totally indulged myself with a favorite activity. I went to the movies, a Double Feature! (Not a scheduled Double Feature. I had to buy two tickets and plan the time so there was no big wait involved. I have to say, I'm a GREAT planner!)
First I saw Mamma Mia 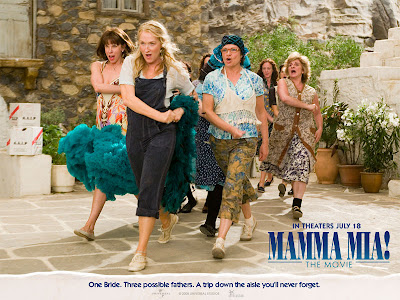 That said, this movie was borderline at times. I was amused, and pretty amazed at the way the Abba songs were inserted into the plot. But hey, it was a musical so there are certain allowances to be made. I was also amazed at the people doing the singing. Meryl Streep has a good voice. Pierce Brosnan wasn't great, but he was ok and occasionally good.
The parts of the movie that made me smile and occasionally laugh out loud were the big production numbers with many people dancing and singing together. I adore synchronization! I would LOVE to be somewhere when people started dancing and singing spontaneously.

I left that theatre smiling. It was only five minutes until the next film started, so I made a beeline for the ladies room and got to my seat with moments to spare.

Next I saw Sex and the City 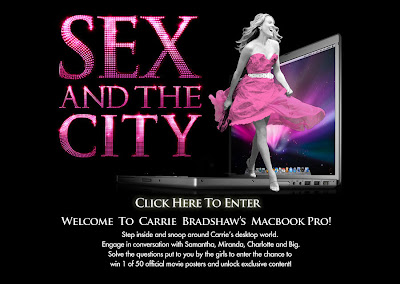 It was so nice to revisit the girls in New York and catch up with their lives. I was thoroughly entertained. I laughed, I cried, and I was defiantly smiling when I left the theatre.

As I got in the car to drive home, I said to myself "I could do this EVERY day" and I meant every word!
Posted by Simply Aware at 9:13 PM Links to this post

His Holiness the Dalai Lama

The Dalai Lama is in Madison! This is his 7th visit to Madison, and our first to experience being in his presence. I am not Buddhist. I'm not anything really. My personal creed of Truth has been taken from many religions and beliefs and it is a changing philosophy, as new information comes my way on a daily basis.
I work with four Tibetans, and their excitement at this upcoming visit has been infectious. They told me that Tibetans from all over the country will convene for this event. All of them have friends and family coming and it will be a week of culture and community and teaching. Most of them saved vacation time to be available for the entire week.
We could only arrange our schedules for one event, but I think that will be enough. I just want to be in the presence of the Dalai Lama, to feel his heart, to experience his love and compassion. We have tickets for Sunday, which means a morning session and an afternoon session. 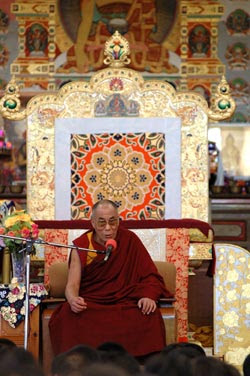 It was quite a site to see His Holiness sitting with a congregation of monks. They all wear robes of saffron and burgandy and are surrounded by flowers and images of Buddah. The audience was dressed in all sorts of garb. It didn't seem to matter.

We all stood when His Holiness entered the arena. Many people did their ceremonial bows and soon I began to feel the peaceful energy emmanating from the front of the room.

I closed my eyes so I could concentrate on this energy, as it felt quite wonderful. I'll admit that I quit listening. I was after the feeling that the words were trying to convey. The words are not necessary. It is the space between the words that is important, to me at least. Soon, I was so full of this peaceful energy that I was on the verge of going to sleep. I had to fight to stay awake when what I really wanted to do was to lie down and surrender to the blissful feeling. Eventually I had to concentrate on the words just to stay with the event. It was an interesting afternoon to be sure.

Because I hadn't paid attention to the teaching, and I'm now curious, I have been researching the Daili Lama and learning. The more I learn, the more I respect and revere this great teacher. I'm so grateful to have had this experience.

Posted by Simply Aware at 10:20 AM Links to this post

Madison is FINALLY experincing a heat wave. It was in the low 90's today, and this evening was in the high 70's. Real summer weather! You'll find no complaining about the heat from me...not after the Winter we endured! 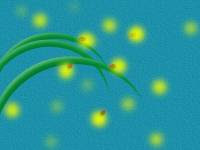 There is no doubt about it. I am easily amused. Recently I've discovered that I can watch the firefly show from my living room window as dusk is falling. I'd thought that the fireflies would be visible at night, but they come out about 8:30pm, and by full dark, they are disappearing. Only a few bright firefly lights are active in the dead of night.

Usually I'm content to watch from the window, but tonight I took my chair outside to view the spectacle without any barriers. It was great! Dozens of fireflies are dancing in the grass, the bushes, and between the cars parked on the street. The neon lights would catch my eye, and sometimes it was like watching fireworks. A big grin would paste itself on my face as light after light caught my attention.

The fireflies are big! The first time I saw the fly, I wondered what it was. Then it lit up and I realized that they were the fireflies! They were attracted to my fire (I was lighting the match to light the citronella candle to keep the mosquitoes away.) When it realized that I was NOT a firefly, they flew away very quickly.

Of course the price I paid was a dozen mosquito bites! Madison has LOTS of mosquitoes and the citronella candle didn't do its job. So I came inside after 10 minutes to apply my home remedy. I keep a bottle of ammonia under the sink. Using a cotton ball, I apply ammonia to the bites, and after a few minutes the itch subsides. Sometimes I have to reapply the ammonia several times, but eventually the sting goes away. It's a pretty cheap cure--97 cents for the bottle of ammonia!

All in all, it was a small price to pay for the entertainment value!
Posted by Simply Aware at 8:06 PM Links to this post

There was some amazing art on display around the Capitol this weekend. We went Saturday before work, and realized we would be spending most of the day Sunday. The weather was great, the crowds manageable, and the food and entertainment interesting. Here are some of my favorite artists from the weekend. 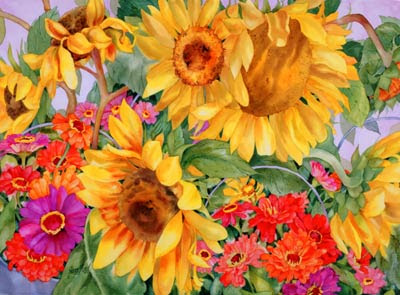 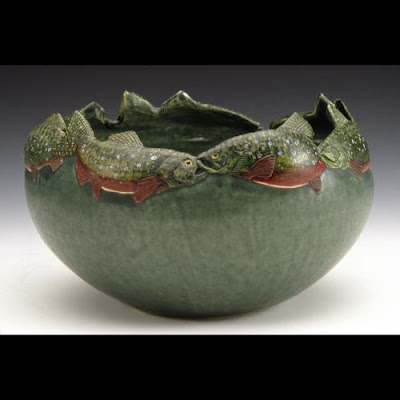 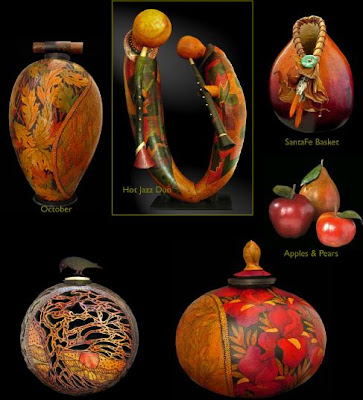 Guess what I bought?! Yes, I bought the kaleidoscope. I've been fascinated with kaleidoscopes for years and have collected a few of my favorites. Mark Reynolds designed and built the best kaleidoscope I've ever seen. Eventually I hope to own more of his work, but for now, I'm happily entertained. Thanks Mark!!
Posted by Simply Aware at 3:37 AM Links to this post