Sunday night I needed something to read, and found myself without a book. Standing in front of the bookcase, I contemplated which of my favorite books would give me the most joy right now. And so I found myself reading "The Shell Seekers" again. I've read it at least half a dozen times. I enjoy it every time.

Sure enough, within the first few chapters, I was hooked. Even though I know the book, I suspend my knowledge and allow the story to be fresh, if not new. Ms. Pilcher writes in such a way, that I feel I am in England. The characters feel like old friends that I'm catching up with.

I read it quickly, it was over too soon, and I'm suffering from the "but I want more" scenerio. Not to worry. I'll read it again next year, and the year after that, on and on.
Posted by Simply Aware at 6:17 PM Links to this post

Roll down the windows!

Today was warm enough to roll down the window while I drove home from work! The temperature was only in the mid 40's, but the sun was shining and that made it feel warm in the car. They say we're getting a little more snow tomorrow, but today that is hard to believe.

When I left for work (6am) our yard was covered in snow. When I got home (3pm) most of the snow in the front yard was gone! I didn't dare walk over the "grass" for fear I'd sink in the mud. But it was nice to see ground!

It reminded me of an incident from my childhood. My Sunday shoes were a pair of black velvet mary jane's. I'd been allowed to wear them to school for some special function. On the way home, I came to an area that we used as a short cut. Previously this area had been snow covered, or at least hard ground. On this day, it was all soft mud. At the edge, it was still rather solid, but as I got several steps into it, my foot began to sink in the soft mud. Finally I found my entire foot sucked into the mud, and when it came out, it was sans shoe! The next step sucked the other shoe off my foot.

I don't remember how distressed I was when I lost my shoes, but when I got home and my mother got the story of where my shoes were, she got VERY upset. She made me take her to the mud pit, and she got a big stick to poke the ground with. Eventually she got my shoes out of the mud, took them home and cleaned them up. She stuffed newspaper in them to retain the shape, then wiped off as much mud as possible. After they dried, she brushed them over and over and eventually, I had shoes for Sunday again. Needless to say, I wasn't allowed to wear my Sunday shoes to school ever again.

It must have made more of an impression than I'd thought, as 45 years later, I think twice before stepping into a muddy yard!

Guess this means Spring is finally on the way. Yippee!!!!!!
Posted by Simply Aware at 5:57 PM Links to this post 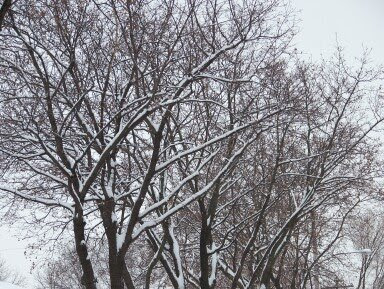 Sure enough, it snowed during the night. We got up to fresh frosting that has covered everything in a thin film. The morning snow is fine and steady. No big flakes, so the accumulation is slight.

One hour later, the flakes have gotten bigger and the wind has come up. The snow that was on the roofs is now blowing like mad, and the falling snow is nearly horizontal!

I checked the weather report to find we're under a storm advisory until 7pm. The projections of expected snowfall have been hiked up to 11-13 inches!!! That is the kind of snow accumulation that began this endless winter. Maybe this is the end?

Now I'm off to make hot chocolate and find a book to curl up in the window with. I'll watch this storm (last storm?!) until I have to go to work. But I'm calling to make sure they aren't closing the store early before I set out in this mess!
Posted by Simply Aware at 8:32 AM Links to this post

Tonight while we sleep, we're supposed to get the beginning of a snowstorm that could bring us 9 inches of snow in the next 24 hours! WHEN IS SPRING COMING TO MADISON?

I want sunshine, and flowers, and leaves on the trees. I want to put up my bird feeders and open the windows to air out the house. I want to take the flannel sheets off the bed. I want, I want, I want......
Posted by Simply Aware at 10:20 PM Links to this post 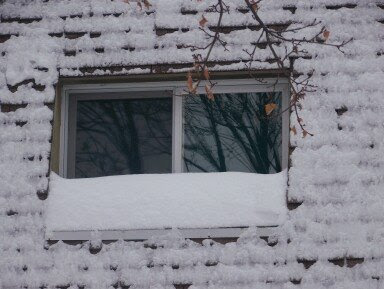 This week has been warm enough that all the snow has melted off the road! This is the first time this winter we've driven on pavement instead of packed snow. I can see small patches of grass as the yards melt, but we still have a long way to go.

Our household has been ill. Guess there is yet another epidemic going around and we both caught it. Coughs, colds, runny nose, chills, fever...all the fun stuff. We both missed two days of work in addition to our two days off. So, for four days we basically did nothing but sleep, drink plenty of fluids, and take lots of medicine that didn't make any difference.

Because the weather is warming up and I don't want the basement to flood again, I "built" a 8" styrofoam wall and taped it to the floor with Gorilla Glue tape. The wall follows the same pattern as the towel parade from the last flood. I am hoping to keep the water in the space between my little walls, so it is directed to the drain in the laundry room.

Sure enough, when some water came into the house, it was NOT in my walled in area. It was 3 feet beyond, in an area that hadn't had any water yet. So, I put down towels, and bought some disposable diapers to line the area. We didn't get too much water, about 5 diapers worth (WOW, the diapers worked GREAT!) and a few damp towels.

That's it. The area outside where the water came in last time has dried out already. I can't see where any more runoff could come from. So, I built my little wall for nothing! Guess I'll take it down. Yep, that's about the way things have been going.
Posted by Simply Aware at 6:42 PM Links to this post

The Flood in the Basement 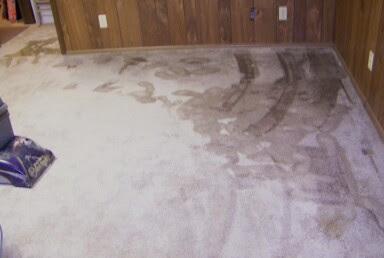 Can't remember if I posted that the basement got wet a couple of weeks ago. We had one day-ONE DAY!- of "nice" weather (above freezing) and when the melting began, much of it came down the wall into our family room and storage room. We called the landlords who promptly came over with wet-vac's to get the water up. Then we set up fans and heaters and within 2-3 days, the damp was gone and we moved our stuff back into place.

At that time, I worried what we'd do when Spring finally arrives (yes, I'm optimistic about the event, even though there is nothing on the horizon to give me that hope!). We've had 100 inches of snow this winter. That is a LOT of melting that will have to happen. But I figured it was not going to happen anytime soon, so I quit worrying.

Yesterday we got that brief glimpse of nice weather to come. It got up to 46 degrees!! Of course, the melting started immediately, but nothing seemed to be coming in the basement. Then, late in the day it began raining. When we went to check the basement before bedtime, it was flooded. About twice as much liquid as the first time. 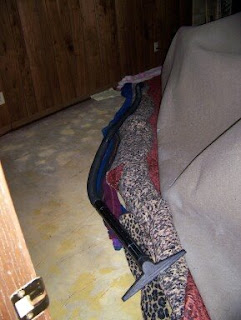 We moved furniture and storage bins. We called the landlords, who brought the vacuums again. We sopped up water for about an hour, then set up a towel perimeter to direct the incoming water (yes, it was still coming in!) to the drain in the laundry room floor. This required about 20 towels, rolled into cylinders and laid end to end to form a path of least resistance to the drain which was about 30 feet away. Then I turned the fan on high and went to bed. 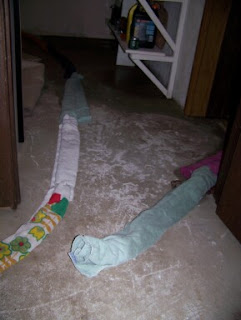 During the night the rain turned to snow and the liquid will freeze and quit coming in. The forecast for the next 5 days is for below freezing temperatures. So, no more flood waters coming.

However, the carpet is still VERY wet. The fans are only beginning to do their work. We still have to dry out the cement, the pad (which will be thrown out and replaced once the leak is fixed) and the storage room. Just now the carpet is suspended in the air on the backs of folding chairs. It created a little tunnel for the fan to blow through. 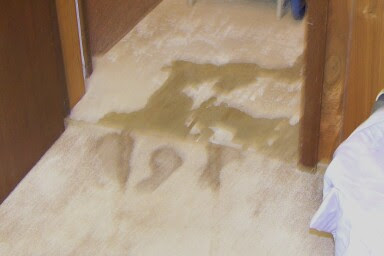 The landlord will probably have to take down the drywall to the outside wall to see why it is leaking.

So, we'll be living with chaos and damp for some weeks to come. Oh the Joy!
Posted by Simply Aware at 10:06 AM Links to this post

March usually comes in like a Lion and goes out like a Lamb.
I'm waiting. Patiently, sort of.
It's time for Spring to begin, or at least think of beginning.

We still have LOTS of snow, very cold days, and no end in sight.

Still, I'm optimistic because it is March.
So, bring on the wind. It's ok, because it will dry out the ground (if the snow melts), and then we can get on to the Lamb phase, which is my favorite, as it brings up images of new growth, and gentle weather.